About the Niigata Manga Competition

When you hear “Niigata,” what comes to mind?

Everyone knows Niigata has rice, sake, snow, the sea, mountains and so on – a place where you can really feel each of the seasons – but did you know that Niigata also hasmanga that is worth boasting about?

From super famous artists to young creators whose works are published in periodicals, there are many people that will surprise you as being from Niigata!

So, why is there a manga contest in Niigata? 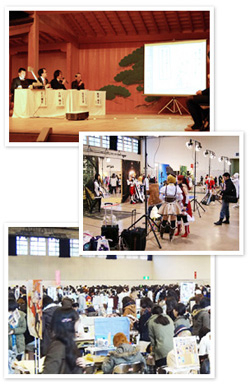 In addition to all of the well-known manga artists that have come out of Niigata, the city is also teeming with creative amateur talent that get to show off their works at GataKet, a large-scale doujinshi manga market that even draws in people from surrounding prefectures including Yamagata, Fukushima, Tochigi, and Toyama. Every year, the area swells with energy as fans flood into the events center, find groups of fans like them, and wear their cosplay outfits.

Additionally, in 1997, Niigata held the Japan Lifelong Learning Festival Manabi Pia Niigata ’97 and with that started the movement to support the manga culture that exists in the city.

Then, in 2011 the Niigata Anime and Manga Festival, sponsored by the city, was held for the first time as we know it today. Since then, every year more and more fans come to enjoy the festival which has grown to welcome over 50,000 people.

These are all reasons how Niigata, despite being a more suburban area, is so easily saturated with manga culture. That said, many locals do not realize how much manga is an asset to the area, let alone how amazing it has become…

What is so great about the Niigata Manga Competition?

That magazine editor! That manga artist! They are the ones who judge your beloved works.

To learn more about the judges click here(Japanese language only).